Hi Mike,
I took your Starved Rock class back in August. I actually went back there with my husband and took more pictures! The reason I'm writing is that your son Scott said that he recommends only using the aperture priority setting, never the shutter speed setting. At the time his explanation made sense, but I forgot now why he said that. Can you please refresh my memory on why it's not worth using the shutter speed setting?

Thanks and I hope you're doing well,
Jennifer R

Thanks and yes we are doing well.

Shutter priority can cause your camera to make mistakes at high and low light. Aperture priority does not. The mistake is over or under exposure.

For example, on a bright sunny day, if you are in shutter priority and you set your shutter speed to 1/2 a second to blur a waterfall, your camera would set your f-stop (aperture) to the highest number it can, say F32. However even at ISO 100 and F32, the shutter speed will be too long and the image will be over exposed. If you use aperture priority, the image would be properly exposed, but the waterfall would not be blurred because the shutter speed would be near 1/1000th of a second.

Another example, on a cloudy day at Starved Rock in any of the canyons, where it is very dark, if you are in shutter priority, and you set your shutter to 1/1000th of a second to absolutely freeze the waterfall, your camera would set your f-stop to the lowest number it can, say F3.5. However even at ISO 800 and F3.5, the shutter speed will be too short and the image will be under exposed. If you use aperture priority, the image would be properly exposed, but the waterfall would not freeze action because the shutter speed would be near 1/2 of a second.

The important thing here is to control the image to your liking. Use aperture priority to control depth of field and blur. Depth of field is how much is in focus, ie is the foreground and subject and background in focus.

Mike
Posted by BesPhoto.com at 2:02 PM No comments: 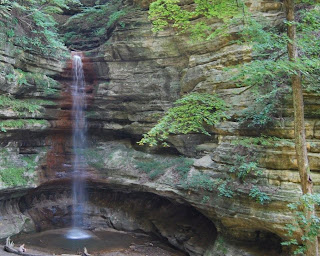 Mike, how could I have made this shot better?
Chuck G.

First off the shot is pretty good as is. And I do like the variations of greens in the leaves.

Possibilities:
Since the tree trunk was being used as a frame on the right side (nice idea), maybe zoom out a little so there is a tience more room to the left of the falls.

I also like the fallen tree at the bottom, it may have made a nice frame there.

Even though the canyon was dark, you could brighten up the entire shot and maybe add a bit of contrast, not sure

Also looks like it could use a bit of sharpening, but don't oversharpen, then edges get to looking flat.

And something we failed to mention much was scale, grand landscapes look even grander when there is something in it that shows just how large the falls are. You could have had someone in the shot at the bottom looking at the falls. Oh, I just saw the kid sitting on the dead tree on the left, almost perfect, maybe have the person be a bit more conspicuous, but to the side like he is so not to distract from the falls.

And the sharpening may not really be necessary as what i'm looking at is only 152k, very small.

One thing I've never done but wondered about was using a low f-stop to try to get the trees in the foreground out of focus, probably wouldn't look good, not sure

Hey just some ideas, it's a great shot just like it is.

I just wanted to be sure and tell you that Kathy and I really enjoyed our session with you and your team at Starved Rock.
We really enjoyed it and I learned things that I can apply, every time that I use my camera!!
Thanks again
Chuck G

Posted by BesPhoto.com at 8:37 PM No comments:

Thanks and a question re Nikon or Canon

Hey Mike,
I just want to say thanks again for all the great information you have provided us when it comes to photography.  Photography is something that I have always been interested and wanted to pursue further, however time and income always seemed to prohibit that.  Now those two items are slowly becoming less of a problem, and I am looking forward to finally going forth with this.  I did have questions in regards to purchasing camera's and accessories.
I noticed that you used a majority of Nikon cameras.  I got a chance to use your extra camera yesterday and was pleased with it.  However I have always been interested in Canon's.  What I am wondering is what you see to be pro's and con's of the Nikon SLR's over the Canon SLR's.  I read somewhere that the Nikon's can use almost any lens that the company has manufactured dating back to 1956 or something like that, where the current Canon's can only use lenses manufactured as far back as 1986 or around there.  Seeing as I have no collection of lenses, this does not concern me too much.  I suppose this will be a good start to my decision of which camera to purchase.
Thanks again for all the help and advice you and your helpers provided.  I look forward to hearing from you and will keep in touch with questions and comments I acquire over time.
Erik P

Hey thanks for coming the the workshop and I'm very glad you learned and had a good time taboot.

When I bought my first digital slr I did not have any lenses that would fit either nikon and canon.  I did have a bunch of pre 1986 canon's, but they wouldn't auto focus and now-a-days you very much need auto focus.  I also had some of the best glass made, it was a 60mm macro for my film Minolta 7xi, probably the most advanced camera ever made, nothing today does what it could do so long ago.  The current batch of slrs depend on autofocus so they do not give you a focus screen worth anything.  My canon ftb, ae1, and a1 all had great focus screens.  But none of my digital slr's nikon d100, d2x, and now d300, have good focus screens, although in the d2x you could replace the focus screen.

My opinion is that both Nikon and Canon make excellent cameras.  Look at features per dollar that you care about.  Also look at the lenses you expect to buy over the next few years and price them.  Then let it be an economic decision.  OR figure out the canon you'd buy and play with it at the store.  Then figure out the nikon you'd buy and do the same.  Then play with them side by side.  There are basic differences in the design of each, but you have to feel them yourself.  What's important to the reviewer may not be important to you.  AND MAKE SURE you thoroughly review the cameras, look at imaging-resource.com and dpreview.com.  Look at the images they produce, they should be the same quality now-a-days.

It's important that the viewfinder is as large as you can afford.

There is a canon slr that does movies now, and the Nikon D90 does too, so look at them even if movies aren't important.

Megapixels are for enlargements, a 6mp camera can do 8x10's perfectly and I have a 40"x60" detailed print of a scene at Yosemite so megapixels aren't necessary anymore, think features and cost.  Here's the Yosemite image over my fireplace: http://www.besphoto.com/common/images/9707%20Controlled%20Burn%20of%20Yosemite,%20Yosemite%20Valley,%20Yosemite%20NP,%20CA%20fireplace.jpg

Your very welcome to call me to discuss this further.

Posted by BesPhoto.com at 10:53 AM No comments:

A field of brilliant red and yellow tulips dazzles visitors' eyes as they trek across the concourse at Oakbrook Center this weekend.

The image, captured on film by Bolingbrook photographer Mike Bessler, is as striking as the beds of living flowers, fountains and gardens liberally sprinkled throughout the outdoor mall.

"That's 14 exposures that I stitched together," said Bessler. "That's why I can have it all in focus."

Bessler, exhibiting at the 46th Annual Invitational Fine Art Exhibition, a show where he won Best of Show honors in 2005, said he prints many of his digital photos directly onto canvas.

"I have a printer the size of a queen-sized bed," he said.

Several of his works feature fine, detailed close-ups that invite the viewer to see the subject in novel ways. There's an eagle's face, a pink flower, a pond's shoreline turned upside-down, the image suspended inside a raindrop clinging to a dogwood branch.

The vertical motion of a waterfall is juxtaposed with the craggy lines of a cliff and the horizontal sweep of water current below in a photo taken at Starved Rock State Park.

"I paint on texture," he said, pointing to the purposely broad brush strokes layered onto a photograph.

An artist who also teaches his craft, Bessler said he exhibits at only one show each year.

Posted by BesPhoto.com at 3:39 PM No comments: